The first Sub-Saharan Basilica in Uganda clocks 60 this year 2021. 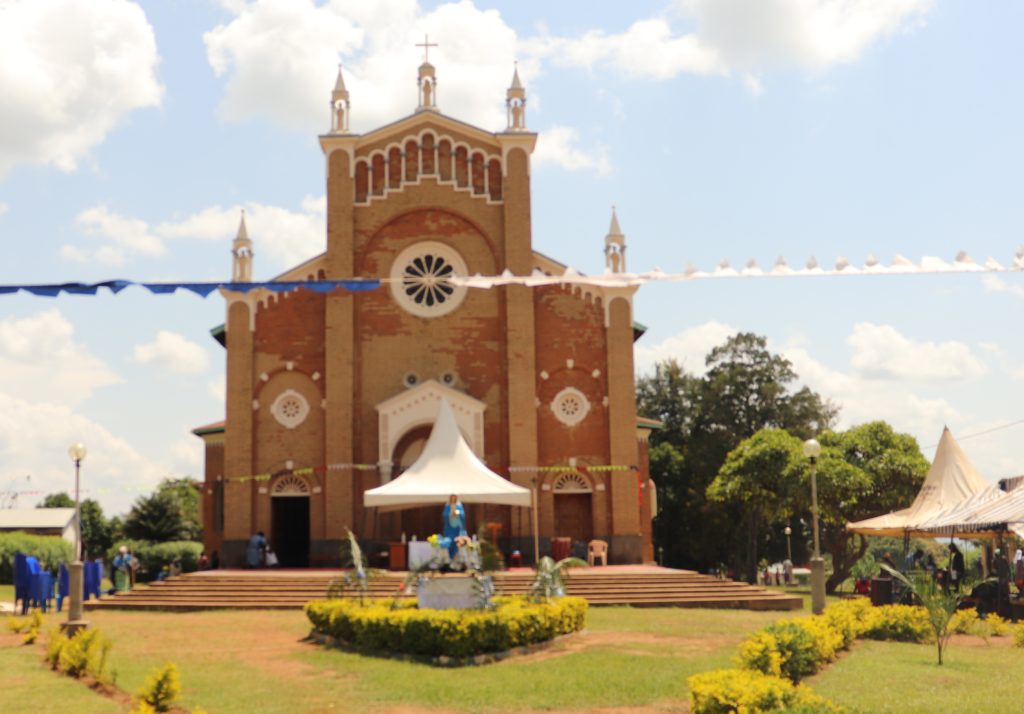 The first Sub-Saharan Africa’s Catholic basilica clocks 60 years in May 2021. The Basilica dedicated to Mary Sultana (Queen) of Africa, Mediatrix of all Graces has been in existence since its inception, on May 26, 1961, when Pope John XXIII granted the title of Minor Basilica to the Church that towers in the district of Yumbe in Arua Diocese, Uganda where, according to local statistics, approximately 76% residents are Muslims and 24% Christians.

“As we celebrate this jubilant day of the Basilica, we recall with gratitude the humble beginnings of this conspicuous and faith-evoking building not only in Arua Diocese, but also in the entire province of Gulu Archdiocese. Credible records indicate that under the leadership of Fr. Pietro Valcavi, a Comboni Missionary, founder of Lodonga Mission, a big Church was constructed with “Palm tree”, Rt. Rev. Sabino Ocan Odoki, the Bishop of Arua recounted.

With the theme Conquer Evil through Blessed Virgin Mary (Rev:12:1), the Bishop further assured the gathering on May 29, 2021, that Fr. Sartori was a man who overcame insurmountable obstacles through his devotion to the Blessed Virgin Mary.

“This devotion inspired him to erect the Basilica. With gratitude to God, we celebrate the sixty years of the dedication of the Basilica with the reminder of conquering evil of religious fanaticism. The missionaries suffered especially seeing catechumens being beaten, flogged to death and or poisoned, chapels being gutted down by fire, gardens of the parents of catechumens destroyed, their cattle robbed, girls forced into marriages. These evils were inflicted by some religious fanatics who did not want Christian Religion to flourish in the district,” said Rt. Rev. Odoki

Religious fanaticism is making a come-back in our time. This is expressed through grabbing church lands, de-roofing of churches, forced marriages, and conditional charities. These are but a few visible expressions of religious fanaticism in the Diocese.

“The Woman clothed with the sun, with the moon under her feet and a crown of twelve stars on her head,” (Rev. 12:1) whose image is placed inside the great Basilica of Lodonga is calling us to respect each other in the expression of our various religious beliefs. All of us Christians and non-Christians should look at Mary as Sultana of peace and unity. With her maternal care, let us join efforts to conquer the evils of drug abuse, alcoholism, domestic violence, and disease especially COVID-19,” continued Bishop Odoki.

The celebrations attracted pilgrims from all over the region, Kampala and neighboring countries of Democratic Republic of Congo and South Sudan. Christians make annual and monthly pilgrimages to the Shrine and Basilica of Mother Mary.

The then Rector and Parish Priest Fr. Emmanuel Asega, accordingly explained, “Uganda is a home of three Basilicas and land of Martyrs. Mary is not only the Queen of Africa but also Queen of the Martyrs of Uganda. She gave birth to many holy men and women, known and unknown including the Martyrs of Uganda. One such person is the Servant of God Fr. Sartori Bernado, he departed for eternity on Easter morning in 1983.”

“Those who enter a Minor Basilica receive special blessings (indulgences) as of those who go to Rome on Pilgrimage. The Basilica is here to give light to those who are lost, voice of love for the afflicted, life for the dying and the joy of all us (part of the anthem of the Basilica),”  he added.

Amin’s declaration of Uganda as an “Islamic State” had consequences both in public affairs and in religious matters too. The war of 1979, which toppled Amin who hailed from West Nile, caused great destruction on the Basilica. It was then repaired and renewed in 1990s under the supervision of Bro. Udeschini Giuseppe MCCJ and Fr Toni Lasalandra MCCJ. Mr Makario Diku retouched the internal decor.

The Basilica  is now a masterpiece of Romanesque style as a monument to the Blessed Virgin.

Church cautions tally centers, commentators not to cause havoc in Kenya elections