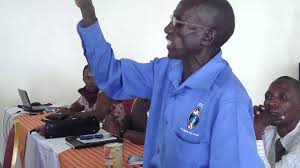 The Kasese District FDC Chairperson, Mr. Saulo Maate has warned political leaders against being mean but rather look deeper into the challenges faced by their electorates so as to share with them the little they have.

Addressing a press conference at his office in Kasese town, Mr. Saulo who commended the Kasese woman Member of Parliament, Hon. Florence Kabugho for procuring an ambulance, wonders why some politicians earning in millions of money cannot save little for the sake of giving back to the community.

He was also not happy with the security that almost frustrated efforts by the Hon. Florence to hand over the donation to the people of Kasese at Trans African Holliday Inn over the weekend. Mr. Saulo speaking….

Mr. Saulo sounded disappointed that some local community members and leaders were reluctantly taking serious the Standard Operation procedures against COVOD—19, saying that community sensitization and observance of SoPs should be a shared role by all stakeholders.

He warned that Uganda was likely to keep in un stable situation should the local residents relax on Corona virus threats. END