Hon. Winfred Bihande Kiiza has described as baseless reports that the Uganda Parliament asked for money intended to mobilize their electorates. 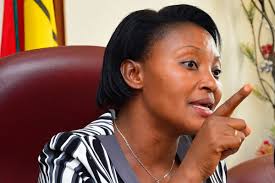 The Kasese district woman Member of Parliament, Hon. Winfred Bihande Kiiza has described as baseless reports that the Uganda Parliament asked for money intended to mobilize their electorates against the deadly Corona virus.

Speaking to Kasese Guide radio in Kasese town yesterday, Hon. Kiiza said there was no justification to fund parliament for mobilization, save for MPs on the national COVID-19 task force and the parliamentary health committee. Hon. Kiiza speaking1……

The former Leader of Opposition in Parliament later asked the electorates to trust their MPs on monies like before, saying that other that the current court orders, legislators would refund to the treasury any funding should it be given out under suspicion. Hon. Kiiza speaking2…

Two members of Parliament, Hon, Gerald Karuhanga and Erute South legislator Jonathan Odur this week petitioned court seeking to halt the Parliamentary Commission from paying 10 billion shillings for each of the MPS to receive 20 million shillings each to fight COVID-19.

Kasese Guide radio however is yet to know what the two MPs petitioned about if no plans were in place to fund all the legislators as Hon. Kiiza allege.

Hon. Kiiza had earlier re-emphasized the need for her electorates to respect ministry of health Guidelines against the spread of the virus for the safety of Uganda. END.