Bridges & roads that were destroyed by floods in Kasese district would soon worked upon. 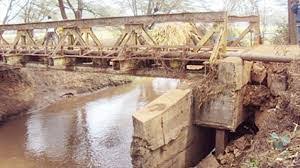 The Government of Uganda would soon start works on the bridges and roads that were either damages of destroyed by the recent floods in Kasese district, the State Minister for Works, Hon. Peter lokeris has said

Addressing locals at Kyanya town in Ibanda Kyanya Town Council in Kasese District during works committee tour around the district following the recent floods, Hon. Peter Lokeris said the committee had already submitted a comprehensive report to the office minister of works about the affect of floods in Kasese District especially on infrustrunctures which the governement had also put in considaration saying very soon the roads and bridges will be worked upon. Hon. Lokeris speaking ………..

Other Members of the committee including, Hon. Rose Mutonyi Masaba and Hon. Emmanuel Kigonzi Mp for Makindi Municipality asked people in Kasese District to plant more trees along rivers and streams, later promised total support as the committee for permanent solution. Other MP speaking …….

The Member of Parliament for Busongora North, Hon. William Musabe Nzoghu who doubles as the Shadow Minister for Works said he will use his position on the committee and parliament to advocate for quick governement response towards the renovation of infrustrunctures in Kasese which are in sorry state due to floods. Hon. Nzoghu speaking …….

The chairperson Local council three for Bugoye and Bwesumbe sub counties, Mr. David Mulyangaso and Mr. Samson Bagenda called for a need of also working on foot bridges along rivers before identifying Kyanya and kyoho bridges like others bridges in Kasese to be the main focus. Mr. Mulyagaso and Bagenda speaking …….

UPDF to conduct verification of veterans in Kasese district