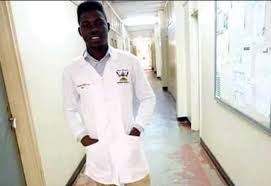 Police have arrested 10 suspects in connection with the brutal murder by a mob of a Makerere university student Emmanuel Tegu.

Tegu was a third-year veterinary student at Makerere who was beaten by a mob a week ago and died at Mulago hospital before recording a statement.

According to Kampala metropolitan police spokesperson Patrick Onyango, all the suspects are residents of Makerere University in Kampala and currently detained at Wandegeya police station.

He says their identities will be disclosed after interrogations.

Onyango has added that some other suspects took off after receiving information of the death of the student and the hunt for them is on.

However According to sources, the arrest follows a meeting between the Deputy Inspector General of Police- Maj. Gen Stephen Muzeyi Sabiiti and Kampala Metropolitan police commanders yesterday.

Maj.Gen .Sabiiti reportedly stormed out of the meeting after the commanders said there were no arrests.

It is alleged that the suspects have counter accused each other beating the deceased student. Ends .